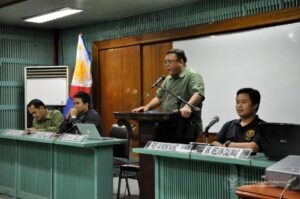 MANILA (Mabuhay) – Lawyer Harry Roque said he is still considering the invitation of the United Nationalist Alliance (UNA) to run for the Senate.

As of now, he said he is still weighing his options as he is still a professor at the University of the Philippines (UP) College of Law.

Roque said he does not think the charges against Vice President Jejomar Binay will stand in court.

The lawyer said he is also considering the alliance between Binay and former President Gloria Macapagal Arroyo who has been the subject of previous complaints filed by Roque.

Roque noted though that senators now do not seem to understand the law.

He said he will work to hold the incumbent administration accountable.

Roque said he will file cases against President Aquino closer to the end of his term. Among the possible complaints, he said, are in connection with the Disbursement Acceleration Program (DAP) and the payment of P800 million for the voided NorthRail contract. (MNS)

Her adventure brings her to the edge of the earth