Have reports of the Land Rover Defender’s demise been exaggerated? 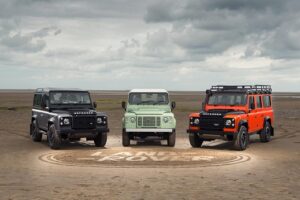 (Relaxnews) – The original rugged off-roader, one of the most iconic and recognizable vehicles in the world, was meant to be heading out to pasture at the end of 2015 after a job well done. The company had even built three celebratory models to highlight the car’s glorious past as a last hurrah, before turning its attention to a replacement model.

However, according to a report in the Birmingham Post, the regional newspaper published in Solihull where the final Land Rovers are being assembled, a plant worker is quoted as saying: “It is going to be extended until at least the end of February [2016].” The same source also suggests that production could in fact continue until April.

Following the initial story, Land Rover issued a statement neither confirming nor completely denying the reports. The company said that that it does not production to continue past the end of January but accepted that no confirmed termination date has been set.

The Land Rover (called the Defender since 1989) has been in constant production since 1948 and has changed so little in terms of chassis and underpinnings in all that time that as legislation surrounding engine emissions and passenger and driver safety continue to tighten, it is no longer cost effective and in some cases, even possible, to adapt the vehicle to keep it in production in its current form. It’s why the car hasn’t been on sale in the US since 1998 when it fell foul of air bag and side impact door beam legislation.

When compared with the newer, shinier models in the company’s range – the Range Rover, Range Rover Sport, the Evoque and the Discovery, the defender looks decidedly agricultural and, historically, that’s been its primary market. And that’s understandable, as the car remains predominantly mechanical and possible to repair with tools, rather than a laptop and diagnostics cable.

The car’s final year of production has been backed by a typically grandiose advertising campaign that has seen fashion designer Sir Paul Smith design a bespoke model and another Defender converted into a mobile trophy case for the Rugby World Cup, while sales have rocketed. The off-roader will also have a starring vehicular role in the upcoming James Bond film, “Spectre” which won’t get its world premiere until October 26.

And, according to Automotive News Europe, this has helped the car achieve a huge jump in sales – up 29% over the past six months, leading the company to add a second shift at its Solihull factory to meet this unprecedented demand.

Land Rover has been developing a replacement since 2012 but unconfirmed reports suggest that it is proving more challenging than initially expected and that it might not hit the road until 2018. All of which seems to add weight to reports that the old Defender might not be dead just yet.