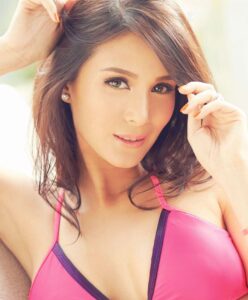 Actress Heart Evangelista admitted that she is taking birth control pills since she does not want to get pregnant yet.

Evangelista explained that still has to finish all her obligations before she can have a baby.

“If I stop, I’ll get pregnant. My doctor advised me not to stop yet, and then, after months, I’ll stop, and I’ll do… ‘yun. I’ll finish first ‘yung [obligations], then I’ll get pregnant. Ang hirap din kasi ‘yung nagsu-shoot ako for a commercial, tapos buntis ako,” she said.

But the actress stressed that she wants to build her own family with husband, Senator Francis “Chiz” Escudero.

“If it’s a boy, I might name him Francis, like Chiz. If girl, I might name her Sofia. Exciting talaga. ‘Yung kids naman niya (Chiz), they’re asking kung kailan. Kung prepared na ako? More or less,” she said.

Angelica Panganiban describes boyfriend as answer to her ‘whys’ before