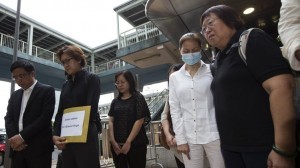 Tse Chi-hang (2nd L) and Lee Mei-chun (R), family members of tour guide Masa Tse, who was killed during Manila’s bus hostage crisis in 2010, lawmaker James To Kun-sun, and survivor Yik Siu-ling (2nd R) observe a moment of silence outside the Philippine Consulate in Hong Kong August 23, 2013. Survivors and family members of the victims of the Manila bus hostage crisis have filed writs in the High Court in Hong Kong to seek compensation from the Philippines. The group is taking legal action after claiming Manila has ignored demands for compensation and an official apology since the tragedy, according to a government radio report. (MNS photo)

The report said lawmakers voted to pass a non-binding motion by People Power’s Albert Chan Wai-yip calling on the government to impose sanctions.

They also voted 41 to three in favor of former security chief Regina Ip Lau Suk-yee’s amendment calling for visa-free access to be scrapped, the report added.

More than 100,000 Filipino domestic helpers are working in Hong Kong. Hong Kong tourists, meanwhile, are among the top ten tourist groups arriving in the Philippines with 86,396 arrivals from January to August this year.

Sought for comment, Foreign Affairs spokesperson Raul Hernandez neither confirmed nor denied the imposition of sanctions but said the government will continue to work to address the issue.

“We will continue to work quietly to achieve a mutually satisfactory conclusion,” Hernandez said in a text message sent Friday to GMA News Online.

Last Tuesday, Hong Kong leader Leung Chun-ying said the government may impose unspecified economic sanctions on the Philippines if Manila will not apologize and grant compensation for a hostage tragedy in 2010, Reuters reported.

The Hong Kong government has been demanding for an apology–from the Philippine government and not the Manila City government– and compensation to the victims’ families.

Pacquiao faces another bout…in the courtroom