Honda revs up for Paris with hot Civic Type-R 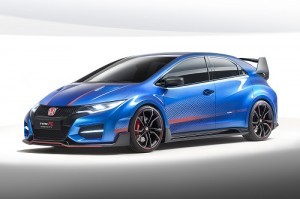 Civic Type R Concept. The car’s performance figures will be revealed on October 2 in Paris. ©Honda

(Relaxnews) – Aimed at those that prize performance above style or subtlety Honda’s hottest of hot hatches will face some stiff competition when it arrives in the French capital this week for the Paris Motor Show.

Just like the SUV, the hot hatchback is very much en vogue, and buyers are currently spoiled for choice. Be it the VW Golf GTI, Renault Megan Renaultsport, Ford Focus ST or Seat Leon Cupra, there’s something to suit every keen driver’s sense of speed, style and practicality.

So Honda’s going to have to do something special to grab attention. Therefore promising that the latest Civic will be the most extreme vehicle ever to carry a Type-R badge – a designation that has appeared on everything from Honda’s NSX Supercar to the current Civic over the past two decades – is a fairly good start. As is the addition of huge, flared rear-wheel arches and a raised rear spoiler.

However, Honda is still leaving quite a lot to the imagination – the company won’t be drawn on final figures, such as 0-100km/h times, until it is officially unveiled on October 2 – but we do know that the car will be powered by a 2-liter turbocharged engine and that it will put out more than 278bhp. Extreme indeed.

Keen drivers or anyone that’s ever driven an Astra VRX will know that putting more than 250bhp through the front wheels can result in some very interesting handling characteristics, to put it mildly. Honda says that it will get around problems such as torque steer and understeer with a trick suspension set-up that will allow drivers to use more of the car’s power reserves more often.

However, even when offered as a pocket rocket, a hot hatch has to be practical enough to complete the school run without inducing travel sickness in rear seat passengers and, to that end, as well as clever suspension, the Type R also has an intelligent damping system. This automatically adjusts front and rear damping forces to keep the car’s body in check and to ensure that it is comfortable when cruising and stiff and solid when going into a corner at high speed.