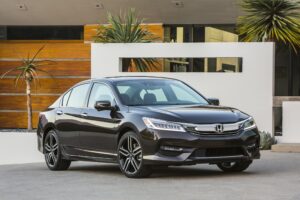 The 2016 Honda Accord: The car was unveiled at the new R&D center.©Honda

Operating profit rose 16.4 percent, as a sharp drop in Japan’s currency benefits exporters such as Honda by making them more competitive overseas and inflating repatriated earnings.

“In general, the Japanese auto sector has continued to enjoy the positive impact of a weak yen,” said Yasuo Imanaka, analyst at Rakuten Securities in Tokyo.

Honda’s sales in North America and Asia rose from a year ago, but weak consumer demand at home saw Japanese vehicle sales fall.

In June, Honda revised down its annual earnings for the previous fiscal year, blaming the expanding recalls of faulty airbags made by embattled supplier Takata, which have been linked to eight deaths and scores of injuries.

This month Honda, the hardest hit global automaker, said it was recalling another 4.5 million vehicles as the scare over a deadly defect in Takata-made airbags widened.

The move took to 24.5 million the total number of vehicles that it had called back over the airbag affair.

The defect – thought to be associated with a chemical propellant that helps inflate the airbags – can cause them to deploy with explosive force, sending metal shrapnel hurtling toward drivers and passengers.

One of the most recent confirmed victims was a woman in Los Angeles who died last year after the defective inflator in a 2001 Honda Civic ruptured, firing metal shards at her.

Tokyo-based Takata has been under fire over the crisis, as it faces lawsuits and regulatory probes into accusations that it knew about the problem and concealed the dangers.

“Concerns over recalls related to Takata’s airbags has cast a shadow over the sector especially Honda,” Rakuten’s Imanaka said.

“Due to the current trend of firms using common auto parts, unexpected massive recalls are potential, sizeable risks for any carmaker,” he added.

Benhur Luy admits to receiving some P4M in ‘pork’ kickbacks