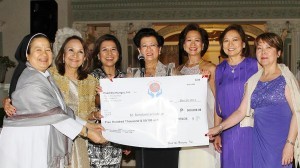 A dinner gathering to raise funds for the victims of typhoon Haiyan (Yolanda) was a big success as a big group of most influential Filipino-Americans came to extend their generosity that was held last Saturday (June 1) at the former Hollywood legendary Mary Pickford Estate to rebuild a school in Tacloban, Leyte.

Our kababayans Edwin and Lani Raquel, who own the beautiful  mansion, were generous enough to offer their home as the venue to raise funds for the Missionary of Benedictine Sisters of Tacloban, who have been helping the survivors of the typhoon that wrought havoc in Tacloban and surrounding cities and municipalities.

Hope After Haiyan committee and FilAm Arts chairperson Rocio Nuyda expressed his gratitude and appreciation to all the guests, including the Benedicitine Alumni (Agnesians, Scholasticans, Bedans), generous donors and entertainers – whose musical virtuosity was apparent throughout their performances, the media, vendors and many volunteers.