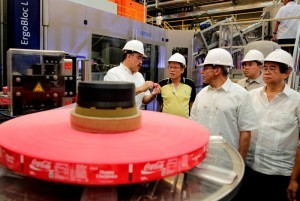 President Benigno S. Aquino III tours and inspects the Coca-Cola FEMSA Philippines Canlubang Plant Expansion during the inauguration ceremony at the Silangan Industrial Estate in Canlubang, Calamba City, Laguna on Monday (November 03). With the President are Coca Cola officials and some members of the local government of Laguna. (MNS photo)

MANILA (Mabuhay) -– The House energy committee has voted, 19-2-1, to approve at its level the House Joint Resolution 21 granting President Aquino additional powers to address a possible power crisis in Luzon during the summer of 2015.

The joint resolution came after a series of meetings by the Joint Congressional Power Commission and House energy committee on the power situation in response to a resolution for a congressional investigation made by House Speaker Sonny Belmonte and Majority Leader Neptali Gonzales II.

The resolution does not include authorization to purchase or lease additional power generating capacity, and instead merely reinforces the interruptible load program.

The resolution states: “Additional generating capacity shall be sourced from the Interruptible Load Program (ILP), fast tracking of new committed projects, and plants for interconnection and rehabilitation; Adoption and execution of Energy Efficiency and Conservation measures shall be pursued vigorously in both public and private sectors;

“That the authority granted to the President shall be valid from effectivity of this Joint Resolution until 31 July 2015 to cover additional generating capacity required for the period of the critical power shortage unless sooner withdrawn by the President, upon the recommendation of the Joint Congressional Power Commission, without prejudice to rights and benefits that may have been vested, and culpabilities and liabilities that may have been incurred.”

“All entities with self-generating facilities (SGFs) shall participate in the Interruptible Load Program (ILP) on or before 31 December 2014 to stimulate additional generation capacities: Provided, that the government shall reimburse the owners of SGFs or backup generators for fuel expenses and reasonable recovery for their use in accordance with the ERC rules: Provided, further, that the existing ERC rules governing ILP for captive customers shall be expanded to cover contestable and directly-connected customers; Provided, furthermore, that the DOE through the National Transmission Corporation (Transco) may activate additional ILP as may be necessary to meet the exigency of the power shortage, subject to compensation in accordance with existing guidelines; Provided, furthermore, that the reimbursement shall not be subject to Value-Added Tax: Provided, finally, that any entity with SGFs which is not registered under the ILP may be manually de-loaded from the grid without compensation:”

During the committee hearing before the vote on Tuesday, Bayan Muna Rep. Neri Colmenares again raised questions on the basis for the request of the President for emergency powers, specifically on whether there really is an imminent power shortage next year.

Colmenares maintained there is no actual shortage of supply but a mere shortage of reserves, which was something the Department of Energy (DOE) had long denied.

The shortage will occur during the month-long Malampaya shutdown beginning mid-March.

During the hearing ahead of the vote, Colmenares asked energy officials if there are planned power plant outages next year.

Energy Regulatory Commission (ERC) executive director Francis Juan said the ERC has no record yet but based on the DOE outlook there are planned outages.

DOE committed to submit a list of the power plants with scheduled outages next year.

Energy Sec. Jericho Petilla, meanwhile, said there is no discrepancy between data used by the DOE and the National Grid Corporation of the Philippines (NGCP), explaining that NGCP merely doesn’t list forced outages in its outlook because these cannot be predicted.

Petilla confirmed some of the plants that will shut down alongside the Malampaya shutdown next year are the same plants that shut down last year when Malampaya was also on shutdown, which led to an increase in electricity rates. Colmenares wants this investigated.

Petilla, meantime, clarified that he did not count yet companies who haven’t signed on under the ILP.

Energy committee chairman Rey Umali maintained the additional powers won’t lead to any increase in power rates as any additional costs will be funded by government, possibly through the Malampaya funds.

Umali also said they may ask the President for a certification or urgency for the joint resolution.

He added that the committee has to work on a deadline. The House hopes to approve this in plenary end of November.

The resolution prescribes the lifetime of the resolution: “The authority granted to the President shall be valid from effectivity of this Joint Resolution until 31 July 2015 to cover additional generating capacity required for the period of the critical power shortage unless sooner withdrawn by the President, upon the recommendation of the Joint Congressional Power Commission, without prejudice to rights and benefits that may have been vested, and culpabilities and liabilities that may have been incurred.”

Before the hearing, progressive groups picketed the south gate of Batasan.

Since the committee has approved the resolution, it will go to plenary for action by the entire House of Representatives.

The resolution was a product of the investigation called by Belmonte and Gonzales on the need for special powers as contained in Resolution 1533.

Abakada partylist Rep. Jonathan dela Cruz angrily demanded for a copy of the Belmonte resolution, but he couldn’t stop the voting.

Umali assured him they’ll act on his concerns but he cannot interrupt the voting. (MNS) 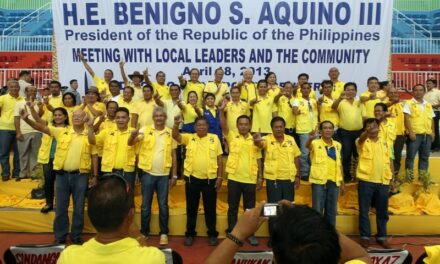