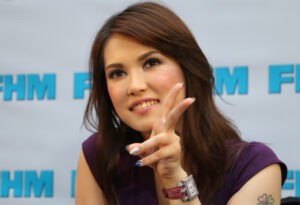 Maria Ozawa seems to be having fun in the Philippines as she shoots her first Filipino movie, “Nilalang.”

The film, which also stars Cesar Montano, is an entry to this year’s Metro Manila Film Festival.

Ozawa revealed that she was initially nervous about working with a non-Japanese cast and crew.

“I’m very excited. I’ve been waiting for this. Actually I was really scared at first because it’s my first movie here and it’s my first time working with everybody, with foreign people. But the more I spend time with people, the crew and the cast, I found out that they could really be nicer than Japanese people,” she said.

Asked how she finds Montano as a leading man, Ozawa said: “He was really a gentleman on the set. He’s really protective. For example, while on set, he’ll always ask if I’m okay.”

“Me working in the Philippines is really a big and important thing for me. It’s changing my life and career. I just have to take another step to my future. I need to level up. You just can’t do one industry in a long time,” she said.

But what is it with Filipino people that she likes the most?

“I guess it’s because of the love that people give me. They are all really nice. It makes me want to stay here longer. I don’t want to go back to Japan. I’ve been staying here more than in Japan,” she said.

In the movie “Nilalang,” Ozawa plays an heir of an organized syndicate who teams up with a forensic expert (Montano).

According to multi-media production company Haunted Tower Pictures, “Nilalang” tackles the “underbelly of corrupt Philippine cops with the Japanese Yakuza and its links to a centuries’ old curse that may be be responsible for the spate of serial killings happening in Manila.”