How Matteo, Sarah will spend Christmas 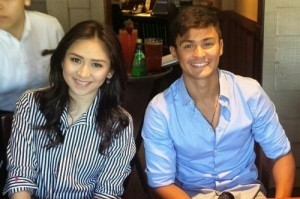 Christmas is just around the corner and it will be a very special one for celebrity couple Matteo Guidicelli and Sarah Geronimo as this will be their first holidays together since they admitted their relationship last June.

Guidicelli said he definitely plans to give something special for his girlfriend.

Guidicelli also reported that their relationship is going smoothly and is getting stronger. In fact, he shared that Geronimo’s and his parents have already met.

Guidicelli said he is delighted that his parents like Geronimo the most among his past girlfriends.

Meanwhile, the actor seemed evasive when prodded about his relationship with Geronimo’s parents. It was previously reported that Geronimo’s mother became stricter when Guidicelli and the singer-actress entered into a relationship.

Contrary to reports, Guidicelli clarified that he and Geronimo are still able to go out on dates just by themselves.

“Siyempre girlfriend ko ‘yan, solo ko ‘yan, ‘di ba? There are ways naman. If you love something or somebody, you will do everything it takes to protect and take good care of it,” he said. (MNS)