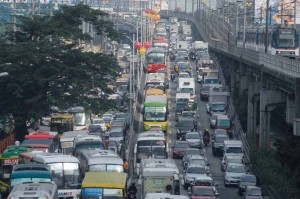 PNP-HPG chief Arnold Gunnacao said MMDA officer-in-charge Rey Arada has been cooperative in breaking down personnel deployment, but was not able to assign traffic constables on major choke points due to a misunderstanding that the HPG teams are to hold these areas alone.

A sudden downpour, however, struck Metro Manila the following night, leaving thousands of commuters stranded in nightmarish traffic until the wee hours of morning.

The MMDA’s schedule is limited until 10 p.m., which left the the HPG to solely resolve the congestion along EDSA. Gunnacao complained of insufficient reinforcements from the traffic constables.

Gunnacao said the MMDA has started to deploy 190 personnel on the identified choke points today but they still need additional manpower to manage the country’s busiest thoroughfare.

The HPG chief has already appealed to other PNP units to assign the personnel that they could spare to EDSA.

HPG will conduct an assessment meeting with other concerned agencies tomorrow. (MNS)