ON JUNE 7, 2010, the U.S. Citizenship and Immigration Service (USCIS) reinstated, on humanitarian grounds, the family petition filed by the late Mr. Rogelio C. Poblete (Rogelio), a U.S. citizen, on behalf of his brother Mr. Catalino Poblete (Catalino), who resides in the Philippines with his wife and son. Revalidation of the instant petition will finally enable Catalino to obtain an immigrant visa and reunite with his United States citizen siblings, daughter, grandson and son-in-law in the U.S. 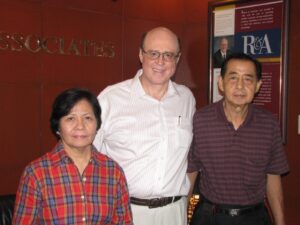 Growing up in the Philippines, Catalino was very close to his brother, Rogelio, and two other siblings, Edgardo and Nunila. Edgardo and Nunila both had the opportunity to immigrate to the United States in 1959 and 1969, respectively. Rogelio immigrated to the U.S. as a physician in 1965. Their father who was a widower, however, had to remain behind in the Philippines due to health problems. Catalino selflessly opted to remain behind with their father to care for him during his last years. This separation was extremely difficult and painful for all of them as they had always been a very close family. All three of Catalino’s siblings immigrated to the U.S. knowing full well that thanks to their brother’s sacrifice they could begin a new life full of opportunities.

The petitioner, Rogelio, became a citizen of the U.S. on June 12, 1974. Rogelio filed a relative immigrant visa petition on behalf of his brother, Catalino on June 7, 1985, as a brother of a U.S. citizen. The relative petition was approved and sent to the U.S. Embassy in Manila, Philippines. While awaiting the availability of the visa, Rogelio passed away on November 22, 1997, a legal event that automatically revoked the visa petition. To make matters worse, On December 27, 2003, Catalinoâ€™s only daughter, Ann Catherine married a U.S. citizen and immigrated to the U.S. Although, Catalino was happy that his daughter found a good and responsible husband, he and his wife were saddened to be separated from their only daughter and grandchild.

The Poblete family consulted with Reeves & Associates (R&A) and retained R&A to represent them for humanitarian reinstatement of the approved immigrant visa petition, as authorized by 8 Code of Federal Regulation Â§ 205.1(a)(3)(i)(C). Under this provision, the Attorney General will not revoke a family-based immigrant petition upon the death of the petitioner where he “determines that for humanitarian reasons revocation would be inappropriate.” R&Aâ€™s attorney Lorena Larios Shah prepared and presented the request for humanitarian reinstatement before the USCIS and highlighted Catalinoâ€™s equities as factors the USCIS should consider in granting the reinstatement request. Some of the equities listed included disruption of an established family unit, hardship to U.S. citizens or lawful permanent residents, age and health of the beneficiary, undue delay by the USCIS, and strong family ties in the U.S.

Catalino waited for over 25 years for this opportunity. His dream of becoming a U.S. legal permanent resident and immigrating to the U.S. to be reunited with his siblings and daughter and bond with his grandson will finally become a reality.

Atty. Reeves personally met with Mr. & Mrs. Catalino in the R&A’s Manila Office and gave them the good news. They expressed their heartfelt gratitude to the firm for making it all possible. They felt as if it was a miracle.