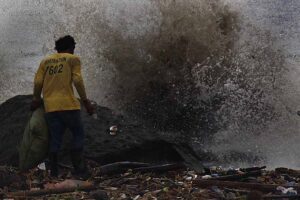 — A man collects recyclable materials washed ashore at Roxas Boulevard on Friday. Typhoon Ineng was last located 100 km east of Calayan, Cagayan, with maximum sustained winds of 170 kph near the center and gusts of up to 205 kph, moving slowly west northwest at 7kph.(MNS photo)

LAOAG CITY (Mabuhay) – As Typhoon “Ineng” continues to pound Northern Luzon, the provincial government of Ilocos Norte through the Sangguniang Panlalawigan has declared the province under state of calamity.

In a special session presided by Vice Governor Angelo Marcos Barba on Saturday, members of the provincial board unanimously approved a resolution declaring the entire province under a state of calamity at about 2:12 p.m..

Due to heavy flooding, thousands of households in low-lying villages in the province remain underwater while some villages remain isolated as of this posting.

Based on initial report of the Provincial Disaster Risk Reduction and Management Council (PDRRMC), over 40,998 individuals or 9,402 families, covering 136 villages in Ilocos Norte are now affected due to flash flood.

Aside from one casualty and one injured due to a fallen mango tree in Pinili town at 10:30 am on Friday, Ilocos Norte’s search and rescue teams have yet to find one missing person identified as Jay-Ar Mallari, 24, in Barangay Mariquet, Solsona town.

As of 5 a.m. Saturday, light to moderate rains still prevail in the province under public storm signal no. 2.

The PDRRMC continues to conduct evacuations in areas threatened by flash floods due to washed out dikes and swollen rivers.

In Pallas Valley, Vintar town, at least three houses in Barangay Ester were partially covered by mudslide, according to mayor Jose Foronda on Saturday.

Since Friday, the PDRRMC along with the various MDRRMCs responded to at least eight rescue operations and evacuated families in Barangays Manalpac, Nagpatpatan, Sta. Ana and Bagbag in Solsona, Catagtaguen in Banna, Cabaroan in Bacarra, Capangdanan in Pinili, Elizabeth, San Esteban, and Baresbes in Dingras and Barangay Loing in Piddig.

A tornado was also reported in Barangay Caunayan, Pagudpud that blown-off some GI sheets of a covered court here while a house was partially damaged in San Antonio, Sarrat.

While communication lines are generally okay in the entire province, power is still out in the rural villages of Batac City, some areas of Laoag City, Bacarra, Piddig, Sarrat, Dingras, Solsona, Pasuquin, Burgos and Pagudpud.

Due to fallen trees, roads were temporary closed in Barangays Magnuang, Billoca and at the Batac City market on Friday.