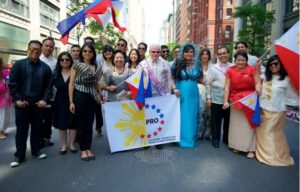 Founded in 2012 by Philippine Ambassador to the United States Jose L. Cuisia, Jr. and Mrs. Ma. Victoria J. Cuisia, in cooperation with the Ayala Foundation Inc.,FYLPRO each year gives ten high-performing next-generation Filipino-Americans the special opportunity to travel to the Philippines and interact with influential personalities in the fields of business, government, arts and culture, civic action and social advocacy.

This year’s immersion program builds on the success of the previous editions. It has also benefited from the feedback and inputs of FYLPRO alumni who still recall the program’s impacts on their journey of self-discovery and reflection on their native country’s strengths, challenges and potential. 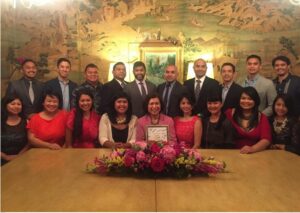 “FYLPRO opened my eyes to what’s possible. Before the program, I wanted to help but wasn’t really sure in what way and how to make it happen. Through the program and with a new support network, I’ve found a way to contribute: to help establish socially-responsible tourism packages, preserve and reinvigorate our traditional weaving arts, and all this to increase the connection between younger Filipino-Americans and our motherland,” said 2014 FYLPRO delegate Adette Contreras, Chief Creative Officer at New York-based event design studio TINSEL & TWINE.

Melissa Medina, 2013 FYLPRO delegate, cites how FYLPRO increased her understanding of startups in the Philippines.

“The FYLPRO leadership immersion in Manila offered unique exposure and open dialogue that provided deep insight not only into what the Philippines is like today, but where the Philippines is going to be in the future. The experiential learning from this immersion program opened my eyes to the growing potential of the startup culture in the Philippines, which is my area of focus for my FYLPRO legacy project,” said Medina, who is the founder of appmyrep, a government technology start-up aimed at innovating the way elected officials connect with constituents.

The FYLPRO screening process is highly competitive with delegates being selected on the basis of their academic and professional accomplishments, as well as the level and quality of their community involvement.

“It is amazing to think that we now have a pool of talented and dedicated Filipino-Americans who are actively working in the service of their communities and the Philippines. The boundless creativity, energy and drive of FYLPRO delegates give me great hope for the future,” Ambassador Cuisia stated.

“I thank all the FYLPRO delegates from 2012 to 2014 who remain engaged and have taken it upon themselves to ensure that FYLPRO continues to achieve its goals in the coming years,” the Ambassador added.

For FYLPRO President Bea Querido, collaboration is one of the key elements of the program’s development and success.

“We are grateful for the leadership and support of both the Philippine Department of Foreign Affairs and Ayala Foundation for collaborating with the previous FYLPRO batches to develop an even more meaningful and prestigious leadership immersion program for the 2015 FYLPRO delegates, Batch 4. I’m looking forward to how the new set of FYLPRO delegates will learn from the experience and develop high impact legacy projects that will help our Filipino communities in the Philippines and the U.S.,” she said.

The 2015 FYLPRO is made possible with the invaluable partnership of the Ayala Foundation, Inc. and the generous support of corporate sponsors Philippine Airlines, Ayala Corporation, Chevron Philippines, Coca-Cola Bottlers Philippines, Philamlife, PHINMA, and SGV and Co.

Make Sure Safety is on the Menu This Thanksgiving