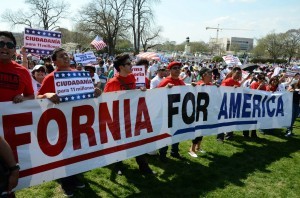 “California for America” this banner says, that was proudly displayed during a rally last April 11 in Washington D.C., where an immigration reform bill was unveiled days later in the U.S. Senate that will allow for a path to citizenship for the more than 11 million undocumented immigrants in the U.S. (Photo from Reform Immigration for America Facebook page)

PHOENIX, Apr 17, 2013 – Maria Del Rosario Rodríguez first heard the good news via a text message from her husband. She rushed to tell her co-workers – there might be a chance for her to reunite with her family on U.S. soil for the first time since she was deported in May 2011.

“My husband told me he heard on the news there’ll be immigration reform for those who are outside (the U.S.),” said the 36-year-old woman, speaking by phone from her current residence in Puerto Peñasco, Mexico.

A bipartisan group of senators known as the “Gang of 8” introduced an immigration reform bill in the U.S. Senate on Wednesday that includes a long path to citizenship for some of the 11 million undocumented immigrants in the country, and a chance for those who have already been deported to return, if they have children or spouses who are already U.S. citizens and can meet other requirements.

That means Rodríguez could get a shot at reuniting with her two U.S.-citizen children, whom she now sees every 15 days when they come visit her in Puerto Peñasco, a Mexican tourist town located five hours by car from their home in Phoenix.

The provision of the bill in question, S. 744, would allow the parents of U.S. citizens or permanent legal residents to request a waiver from the Secretary of Homeland Security to allow them to apply for legal residency.

Applicants would need to meet all requirements, which include not having a felony conviction. Those who qualify would be classified as Registered Provisional Immigrants (RPI) with a right to travel and work in the United States. After 10 years, they would then be given a chance to apply for a green card.

The Border Security, Economic Opportunity, and Immigration Modernization Act would also allow DREAMers – undocumented immigrants who came to the country as children – who have been deported a chance to reenter the United States with RPI status.

While this is apparently the first time an immigration reform bill offers deported immigrants a chance to return to the country legally, the law is still very narrow, explained Claire Bergeron, a research assistant at the Migration Policy Institute (MPI) a non-partisan immigration think tank based in Washington, D.C.

“It will be limited to people that were not deported for a criminal reason,” said Bergeron. “What kind of criminal convictions will bar you will depend on regulations issued by DHS (Department of Homeland Security).”

In Arizona, this particular aspect of the proposed bill is of special interest because the state has carried out large numbers of deportations resulting from state laws like SB 1070 and heavy-handed enforcement tactics such as immigration sweeps of neighborhoods and businesses in places like Maricopa County. During 2010, the year SB 1070 became made it a crime to be an undocumented immigrant in Arizona, more than 92,000 people were deported from Arizona, accounting for about one quarter of deportations nationwide.

“With SB 1070 we’ve seen too many deportations,” said Petra Falcón, president of the organization Promesa Arizona. The activist group has been holding vigils the last few days in expectation of the immigration bill being introduced.

Falcón and others marched on Wednesday to the Maricopa County Jail on 4th Avenue in Phoenix to protest the arrest of immigrants caught working with false documents – a charge that could result in their deportation.
“Moving forward, we must ensure that individuals are not excluded from participating in this historic reform because of old or minor criminal offenses,” said Alessandra Soller, executive director of the American Civil Liberties Union (ACLU) in Arizona.

The provision S. 744 would also allow people currently in deportation proceedings to apply for RPI status.
Falcón and other activists believe that’s a positive element of the proposed bill, but say President Obama should declare a halt on all deportations, with so many continuing to face harsh penalties in states like Arizona.

Jaqueline García, a 16-year-old U.S. citizen, has renewed hope that her grandfather – her legal custodian – will now have a chance to come back home. In May of last year, he was driving to the hospital to visit his wife when local police pulled him over, asked for his papers and subsequently turned him over to immigration authorities.

“He didn’t have anything (crimes) on his record,” said García.

After her grandfather was deported, García dropped out of high school to become the main breadwinner for her family.

“I’m really hoping for this legislation to keep going further,” she said. “I really need my grandfather – it’s been really hard for me to work two jobs, taking care of my brother and my grandmother.”

Cynthia Gomez, the daughter of Maria Del Rosario Rodríguez who was deported and now lives in Peñasco, is more skeptical.

“I’m obviously excited about it, but I’m doubtful. It sounds too good to be true,” said the 17-year-old.

For the past two years, Rodríguez has had to adjust to life in Mexico after being gone for over a decade.
“There’s lots of people like me here (in Mexico),” she said. “My son doesn’t like to come here (and) the future of my daughter is in the U.S. I do hope they do something, because I’m not the only one.”

According to Bergeron, there are still many questions that need to be answered as to how the waiver for those who were deported will work, and whether it will extend to those who left the United States by choice

According to the Department of Homeland Security, the number of undocumented immigrants in Arizona dropped by 200,000 between 2008 and 2011. Many chose to leave the state to relocate to other, friendlier locations. Others returned to their country of origin due to Arizona’s strict employment laws and the frequent immigration sweeps.

Salvador Reza, a longtime human rights activist in Arizona and a member of the indigenous collective Tonatierra, said that giving a second chance to people who were deported is one of the “only aspects of the bill I like.”

“What I worry about,” he said, “is how they’re criminalizing the people that will be left outside of the reform.”

Beyond possible: The sky’s the limit for the all-New 2016 Prius at Wondries Toyota 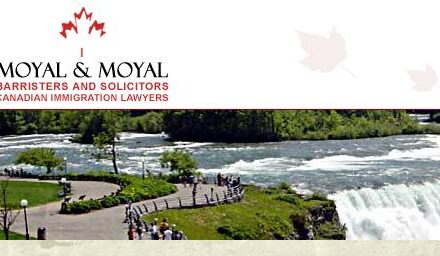