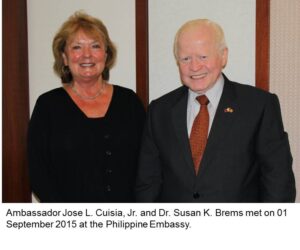 WASHINGTON, DC — In a meeting at the Philippine Embassy in Washington D.C. on  01 September, Dr. Susan K. Brems—the incoming Mission Director of the United States Agency for International Development (USAID) for the Philippines, Pacific Islands and Mongolia—reaffirmed the strong development partnership between the Philippine Government  and USAID.

Dr. Brems is a career member of the Senior US Foreign Service with the rank of Minister-Counselor, who brings to Manila twenty-three (23) years of experience as a development diplomat for USAID. She previously served as Mission Director in Zambia (2011-2015), Deputy Assistant Administrator in the Bureau for Global Health (2009-2011), and Mission Director for Angola (2007-2009).

During the meeting, Ambassador Jose L. Cuisia, Jr. expressed appreciation for the technical and financial support that the United States, through the USAID, provides to the Philippines. He also briefed Dr. Brems on the recent economic developments, including the good governance efforts under the Aquino administration, particularly with respect to transparency and public accountability.

“It was a great opportunity to discuss with Dr. Brems our government’s commitment to improving the lives of average Filipinos, as well as the social development objectives under the President’s leadership. We also exchanged views on the conditional cash transfer program of the government,” Ambassador Cuisia said.

Dr. Brems expressed her commitment to continuing the strong program and cooperation activities of USAID in the Philippines.

Ex-councilor admits up to P500,000 monthly payola from Binay