Inflation slows down to 2.2% in April as food, fuel, electricity prices slip – NEDA 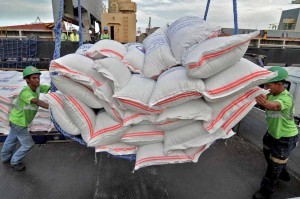 MANILA, May 5 (Mabuhay) — Lower prices of food, fuel and electricity brought the headline inflation down to 2.2 percent in April from 2.4 percent in March and from 4.1 percent in April 2014, the National Economic and Development Authority (NEDA) reported on Tuesday.

“Low and stable inflation in January to April 2015, which averaged at 2.3 percent, bodes well for consumption growth. It is also within the Development Budget Coordination Committee’s inflation target range of 2.0 to 4.0 percent,” said NEDA Officer in Charge (OIC) and Deputy Director-General Emmanuel F. Esguerra.

A moderate inflation of 4.0 percent from 4.4 percent in the food subgroup lingered in April, putting a drag on headline inflation, according to the PSA. “The slowdown in food inflation can be attributed to slower price adjustments in rice, meat, and fruits.”

Non-food inflation also slackened in April on the heels of rollbacks in gas, electricity and other fuels. The rollback in domestic petroleum prices continued following a sharp decline in international oil prices since the last quarter of 2014, NEDA reported.

“Core inflation in the first four months of 2015 averaged at 2.5 percent,” NEDA said.

Inflation in the National Capital Region (NCR) slowed down to 1.5 percent in April from 1.9 percent in March 2015 and 3.3 percent in the same period a year ago.

“This is accounted for by slower inflation in several major commodity groups including food and non-alcoholic beverages,” according to NEDA.

But the NEDA official noted potential risks to inflation in the coming months, particularly the current episode of a mild El Niño – should its adverse effects intensify.

The situation must be monitored regularly to ensure that appropriate policy actions are implemented without delay in response to the incidence of drought in agriculture areas, Esguerra said.

“Timely importation of rice to augment domestic supply should serve as a ready measure to prevent the repeat of the high rice prices witnessed in the third quarter of 2013 until 2014,” he said.

He emphasized the critical issue of finding a lasting solution to decongest Metro Manila as a way of heading off disruptions in the domestic supply chain, especially when it comes to promoting higher productivity in agriculture and food processing.

“There should be programs to cover the use of appropriate technology to expand production capacity as well as intensification of credit programs and facilities with crop insurance,” Esguerra said. (MNS)

Women in Philippines put food before sex in survey