Iqbal pleads to Senate to not reveal his true name 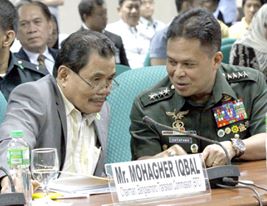 Attending the resumption of the Senate hearing on the proposed Bangsamoro Basic Law (BBL), Iqbal explained the situation behind his using an alias was “complicated.”

Senator Ferdinand “Bongbong” Marcos Jr., chair of the Senate committee on local government, insisted that Iqbal reveal his true name to no avail.

“We use nom de guerre to protect myself, my family, and the struggle. If I was harmed and killed, perhaps I would not be here in this august body,” Iqbal said.

Marcos retorted, “It does not inspire confidence in anyone, when you’re sitting across the table and you’re not sure of the identity of the person you’re talking to.”

Iqbal said he would reveal his true identity once the BBL, which seeks to create the Bangsamoro political entity, was signed into law.

“When the BBL is passed by Congress and hopefully ratified, that will be the time everything will normalize and we will disclose that,” Iqbal said.

“But at this point in time, I request the Honorable body not to compel me to reveal my identity,” he added.

Iqbal was backed by government peace panel chair Miriam Coronel Ferrer and Presidential peace adviser Teresita Deles who both said Iqbal’s use of an alias was part of his right to privacy.

“There are privacy and security issues here (There is a) right to privacy of any public official,” Ferrer said.

Senator Tito Sotto even walked out of the hearing, saying he would not talk to people he did not know the true identity.

“The BBL is a very important piece of legislation. I prefer discussing it with persons I know. Therefore I will just talk with you, Mr. Chairman, during the plenary,” Sotto said.

Iqbal is accused of using different names in his passports especially after the Bureau of Immigration said the name Mohagher Iqbal was not in its records.

Speculations are also rife that Iqbal is a Malasyian citizen. Iqbal has denied this allegation.

The peace panel and even Justice Secretary Leila de Lima have said that Iqbal’s use of an alias did not invalidate the peace deal documents. (MNS)