Is an electric car battery breakthrough on the horizon? 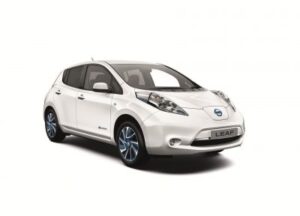 (Relaxnews) – Demand for the current crop of plug-in electric cars may still be weak but Nissan, Renault and Volkswagen are all confident that a mass-market electric car is just around the corner.

This week Nissan added a new model to its range of Leaf electric cars. The Leaf Acenta+ Grade adds special 17-inch alloy wheels and a 6.6kW charger as standard, meaning that it can be recharged in just four hours. And these practicality features come on top of a telematics system, reversing camera and cruise control and speed limiting system.

The extra creature comforts will go some way to attracting new customers to the electric car market. However, the trickle of new customers won’t turn into a stampede until the Leaf’s range — 124 miles (200 km) — can be improved.

However, as demand for electric cars increases, their cost will come down. And, as for driving range, Renault-Nissan is confident that within five to 10 years thanks to on-going research and development, range will be extended significantly — three to four times greater than the current distances.

Nissan isn’t the only company confident that a better battery is really just around the corner. This week, during an interview with German publication Bild, Volkswagen boss Martin Winterkorn described the battery technology it is currently working on as a “quantum leap for the electric car.”

The battery in question is being developed in the US, in Silicon Valley and could prove the key to creating a practical, affordable plug-in electric car with mass market appeal. Winterkorn said that the battery was cheaper, smaller and more powerful meaning that “An electric Volkswagen that can travel 300km on electricity is in sight.”

There is no debating whether electric cars are cleaner than their gas-powered counterparts in terms of tailpipe emissions; however, a new study from the National Bureau of Economics, first detailed on Monday by CityLab, suggests that depending on how the electricity that recharges the battery is generated, eclectic cars could be generating more pollution than an internal combustion engine. The research, conducted in the US, shows that in states that use coal fired power stations, charging an electric car is adding to the pollution and over a lifecycle of 150,000 miles could be less environmentally friendly than an equivalent size gasoline car.

PH agri damage for 2013 exceeds average for past 5 years