Is Grace Poe American or Filipino? 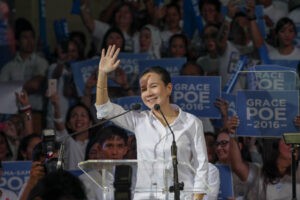 “The timeline has already been set and by the first week of November, I believe a decision will be made by the tribunal,” Legarda said.

Given that the expected release is way beyond the October 16 deadline for the 2016 aspirants’ filing of certificates of candidacy (COCs), Legarda said Poe “can still file even if there is a pending petition” on her citizenship before the tribunal.

Legarda, who is a part of the nine-member SET, refused to further comment on the issues arising from the presidential aspirant’s case considering Supreme Court Associate Justice Antonio Carpio’s earlier pronouncement disputing the nature of Poe’s Philippine citizenship incurred him demands to inhibit from the case.

“I believe that is all I can say for now and whatever has been said by both sides, that’s said and done. And it’s better left to the discretion of the tribunal when we make our final decision,” she said.

Legarda said the SET decision will set a precedent where the future of foundlings in the country are at stake.

“This is very historic and it will reverberate in the future for or against the rights of foundlings – those found, those adopted,” she said.

The senator also said Poe’s case is a “very serious matter” as vying for high positions in the government and even other professions in the land requires one to be a natural-born Filipino citizen.

“There are many professions where you should be a natural-born Filipino citizen,” she added.

When asked about how she sees the case in line with Poe’s presidential bid, Legarda said politics will not get in the way she handles the matter and that she will derive her judgment on sound arguments.

“My decision will be based on what did I hear, what did I see- based on enlightened judgment. And I believe that I will make that soon within a month,” she said.

Legarda said her party, the Nationalist People’s Coalition, never tried to influence her take on the case amid issues of tribunal members’ political ties. Many NPC members are supportive of Poe’s candidacy.

“Being a member of NPC, to be fair to the party, they have never called me or pressured me or asked me what my decision will be,” the senator said.(MNS)

PH TO SIGN DEAL WITH JOHNSON&JOHNSON FOR 5M DOSES

Dream drives for summer: An expertâ€™s picks for great road and vehicle pairings