Is Mark Melligen ready for the big leagues?

LAS VEGAS – “Mark is a different fighter now,” Edward Martin of Team Melligen noted. Martin was referring to world-rated Filipino welterweight Mark Melligen, who is considered one of the brightest prospects in Top Rank’s stable of boxers. 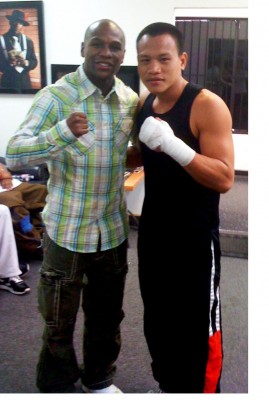 “His jabs and punches have different sounds. They are so strong and powerfulâ€¦very evident in his sparring last Wednesday,” said Martin.

This was seconded by Tony Martin, Melligen’s Las Vegas- based trainer. “His training and his conditioning while he was in the Philippines did wonders for Mark. His punches and jabs were so strong that they hurt my wrists as we used the mitts. More important is that his positive and caring attitude is winning boxing fans in his favor like his comments after his win in Cebu where he asked the spectators if they were happy with his performance and they shouted in unison, affirmatively,” he reveals.

Melligen knew it. Tony Martin knew it. ALA Promotions in Cebu, which believed and took him under its wing from the start of his professional boxing career, knew it. Collectively, they thought that Melligen’s position as being a Top Rank Promotion’s highly regarded prospect must no longer be a mere prospect. Following a successful campaign in America with eight wins and only one freak loss against well-respected boxers, Melligen is now ripe to become a world championship contender.

ALA Promotions (Cebu) provided Melligen with a personal trainer to hone his conditioning skill to ensure Melligen win and shine in his upcoming fight.

“Melligen has to exceed expectations. He should win convincingly. I am pretty sure doors will open to him towards a higher and more fulfilling level,” coach Martin says.

“Sky’s the limit for him. He has to outshine other fights to be recognized not just as a prospect but a world contender for the welterweight title,” Martin adds.

If Melligen’s last fight in the Philippines were an indication of a better and more aggressive Melligen, then Martinez will be up for a good beating,” predicts coach Martin.

By all looks of it, supporters agree that Melligen could say he came to fight, entertain, win convincingly, and make everybody happy. Then he could say finally “I fought, stood and delivered.”

This first world championship bout of 2011 in Las Vegas also features a rematch for the NABO/NABA/WBC Continental Americas welterweight titles between undefeated champion Mike Jones of Philadelphia against Jesus Soto-Karass of Mexico. Jones and Karass first fought November 13 last year under the Pacquiao-Margarito fight where Jones won, but which many believed could have gone either way.

The championship fights will be televised by HBO Boxing After Dark starting at 6:45 p.m. PT.

The Melligen-Martinez championship fight will be covered by ABS-CBN. Doors open at 4:00 p.m. PT with the first bell at 4:30 p.m. PT.

Tickets for the event are priced at $250, $125, $50 and $25, not including applicable service charges. They can be purchased at all Ticketmaster locations, select Smithâ€™s Food and Drug Centers, and Ritmo Latino. Ticket sales are limited to eight (8) per person. To charge by phone with a major credit card, call Mandalay Bay at (877) 632-7400, or Ticketmaster at (800) 745-3000. Tickets are also available at www.mandalaybay.com or www.ticketmaster.com.