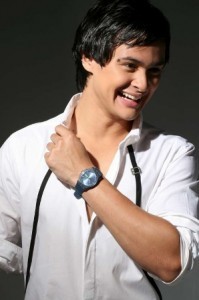 MANILA (Mabuhay) — With several local celebrities getting engaged this year, actor Matteo Guidicelli was asked to share his thoughts about popping the question to his girlfriend, singer Sarah Geronimo.

Guidicelli said things are going well between them as a couple, but he feels he and the singer are too young to settle down.

Guidicelli was quick to add, however, that he will make Geronimo feel that she is “the only girl in the world” should he decide to propose to her.

When asked if he currently sees Geronimo as “wife material,” the actor replied: “Oo naman, siyempre.”

Guidicelli politely refused to talk more about Geronimo after this, explaining that he does not want others to say that he is using the singer for the promotion of his movie “Moron 5.2”, which will hit cinemas nationwide on November 5.

Although he does not feel offended by such comments, Guidicelli said he would rather prove to his critics that he is working hard as an actor.

“I want to work on my career a lot, create a name for myself. And siyempre this is reality, she is my girlfriend, so they will always say things they want to say. Basta I will prove [them wrong]… As much as possible, ayaw kong gamitin ang ibang tao. Gusto ko ay galing sa akin at galing sa hard work ko,” he said.

When prodded by members of the media about his relationship with Geronimo and her parents, Guidicelli said: “You know, I really want to answer your question. But like I said, I don’t want na may magsasabi na ayan na naman, I’m just talking about her in my film promo… Sana we can talk about the other things, about the film and all this stuff. Siyempre, I don’t want to insult anybody.”

“Siyempre masaya tayo pero I just want to be careful with what I say because I’m on a thin line. I don’t want to insult anybody or step on anybody,” he added. (MNS)

Nikki Gil on split with Billy: ‘I was a wreck, nadurog ako’