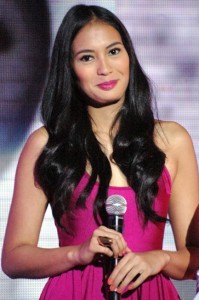 Daza signed a contract with ABS-CBN and was welcomed by the network’s executives led by president and CEO Charo Santos-Concio.

“Napaka-excited ako and overwhelmed with this warm welcome. Coming here, everybody has been welcoming me at kinukuwento ko sa kanila na even the waiter was telling me ‘Ma’am welcome to the Kapamilya.’ Parang proud na proud siya. It makes me so honored to be part of this family,” she said.

Asked why she decided to change networks, Daza replied: “I wanted a new challenge in my life and I want to try something that I haven’t done. I want to to expand my horizons and take this journey as an actress naman.”

The actress-host admitted it was a hard decision for her to leave the noontime show “Eat Bulaga.”

“Nung Saturday last day ko na. It was very emotional lalo na kay Ryzza (Mae Dizon) because she’s my little student but they were all very supportive and they all wished me luck and they are excited also to see what I have in store here sa ABS-CBN,” she said.

Daza said she signed an exclusive contract with ABS-CBN for both TV and movies. “Bongga naman siya, ‘yun muna,” she said.

In the interview, Daza revealed that her first project in her new home is the upcoming series “Nathaniel,” with Gerald Anderson as her leading man.

“Yes, kasama ako sa cast ng ‘Nathaniel.’ I will be working with Gerald Anderson and Shaina (Magdayao), Pokwang and Coney Reyes and amazing cast. I’m so excited for that,” said Daza, who will play the girlfriend of Anderson in the upcoming show.

Daza admitted it was her dream to work with Anderson.

“Si Gerald talaga ang gusto kong makatrabaho kasi nakita ko siya sa ‘On The Job’ and I saw kung gaano siya nag-grow as an actor and I was very impressed. So siya ‘yung number one, that’s why I’m so excited to work with him,” she explained.

Daza was part of the movie “It Takes A Man and A Woman” with Cruz and Sarah Geronimo.

Isabelle, the daughter of actress-beauty queen Gloria Diaz, also revealed that her mother singled out Magdayao among her co-stars.

“Ang sinasabi ng mom ko, siyempre ‘Do your best, you are only as good as your last scene’ at ‘Shaina is a good actress, you have to learn from her.’ Also she told me – siyempre my mom is my number one fan – ‘you are magaling.’ She always tells me that every day, so parang ‘yun ang palagi kong naririnig sa kanya. But she said ‘ABS-CBN is a different level and they really expect the best from you,” Daza shared.

“She wants me to focus on being an actress also. Parang same lang naman kami,” she added.

As part of her preparation for the series, Daza said she will undergo acting workshop. (MNS)