Iya: I was a virgin until wedding to Drew 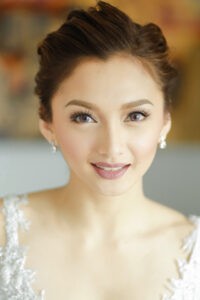 Iya Villania and Drew Arellano did not have sex during their 10-year relationship, until they got married in February 2014, according to the actress-host.

Villania, 28, talked about her stand on pre-marital sex as she addressed a recent comment she made on her long-time friend Nikki Gil’s Instagram page, defending the actress-singer against those questioning her virginity.

Gil, who was in five-year relationship with TV host Billy Crawford until July 2013, has said she made a vow not to have sex until marriage. At the time, Gil’s stand was speculated as one of the reasons behind the breakup.

“I know how it feels,” Villania said, referring to being accused of lying about her virginity.

Referring to not having sex before marriage, Villania added, “I do believe in that. You know, I don’t look down upon other girls who practice it [pre-marital sex]. It doesn’t make you less of a person. Kanya-kanya namang values ‘yan, e.

“But, personally, I do believe that one should not practice pre-marital sex.”

Asked to confirm whether this was the case with her and Arellano, Villania laughed as she said, “Yes! Doon ko naman na-confirm na mahal niya talaga ako.”

“He was very patient, yes… I mean, it’s easy now for me to say because we’re married now,” Villania said, adding that between her and Arellano, the 34-year-old host’s decade-long abstinence is more “impressive.”

“It’s actually nakakatawa. Mas nakakabilib si Drew!” she said, laughing. “It’s actually easy for… which is why ang lakas ng loob ko magsabi. It’s easy for girls who [haven’t] experienced anything because you don’t know what you’re missing out on!”

Villania acknowledged that there may have been temptations, but expressed confidence in the values her husband upheld, noting he is Catholic.

“Well, nasa values din naman ng lalaki ‘yun, e. It’s really up to the person. It really boils down to the values,” Villania said, echoing a statement made by Gil in the weeks following her breakup with Crawford.

She added: “I mean, sa 10 years of being together, there were times na we made mistakes. But, you know, that’s what it is to be a person. I mean, no one had never made mistakes.”

Villania encouraged other women to avoid pre-marital sex, saying preserving one’s virginity until getting married is something to be proud of, as in her case.

Sarah G shares how she has grown as an artist