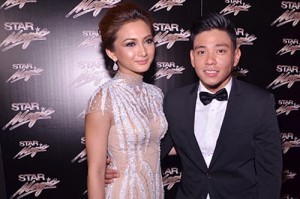 TV hosts Iya Villania and Drew Arellano finally exchanged vows on Friday afternoon after 10 years of being a couple.

Villania, 27, and Arellano, 34, got married in a private ceremony held at around 3:30 p.m. at Meditation Point, Kawayan Cove in Nasugbu, Batangas. The reception followed at the Bamboo Beach Club.

Villania and Arellano, who celebrated their 9th anniversary as a couple last May 9, have been vocal about having “plans for the future,” but not about the details of their wedding.

“We are really just a private couple and I would like to think that it’s something that has helped us in becoming strong so far,” said the actress host in an earlier interview, when asked about the secret to maintaining a long-lasting relationship. (MNS)

Hospitalized Ylona urges fans to be ‘aware of their mental health’