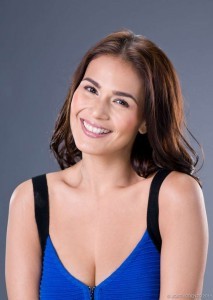 Iza Calzado, who stars in the box office hit “Starting Over Again,” believes veteran director Olivia Lamasan is her lucky charm every time she makes a movie with Star Cinema.

Calzado noted that Lamasan also directed “Milan,” which was actually her first film with the production outfit and also starring Piolo Pascual.

Calzado admitted that she is still amazed at the reception to “Starting Over Again,” which has already earned over P200 million five days after it opened last week.

The “Biggest Loser” host said she is elated that many of her friends are interested to see the film not just because she’s part of it.

“I have some non-showbiz friends who also want to watch. So we invited some of our friends. Kaming lahat na under [my manager’s] wing. And then I invited people who are close to me. Tuwang tuwa din naman ako na nakasama ako sa movie na ‘to. I’m so proud of the film so might as well watch it with people special to me, like family ko,” she said.

In “Starting Over Again,” Calzado plays the role of Patty, the girlfriend of Pascual’s character Marco. (MNS)

Jake not depressed over work