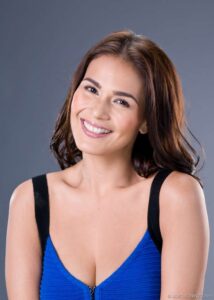 MANILA (Mabuhay) — Actress Iza Calzado admitted that she’s not yet ready to be a mother.

Calzado, who is in a relationship with British-Filipino businessman Ben Wintle, also revealed that she’s also considering using a surrogate.

Calzado made the statement as she was asked of her dreams in life.

Calzado admitted she’s not yet ready to settle down soon although she and boyfriend are already talking about it.