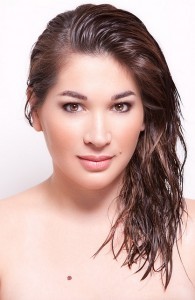 Former actress Jackie Forster believes that her daughter, who is battling leukemia, is already cured.

“We believe she’s cured already. Medically speaking, she is in remission. She still has to undergo two years of chemotherapy. But when we look at her, we pray, and she’s cured,” she said.

Forster discovered the condition of her daughter when they were staying in Malaysia and her daughter was constantly having fever attacks.

She initially thought her daughter had dengue fever, but when Caleigh checked by a doctor, they were told that she had symptoms of leukemia.

Forster admitted that at first, she was in denial, until more symptoms became apparent.

“Nu’ng una nilalagnat lang siya that was on and off. So I decided to bring her to a specialist. I was scared it would be dengue. I took her to a pediatrician one day, had her blood drawn. Of course he knew the symptoms [of leukemia]. I was even thinking ‘anong leukemia’… in denial pa ako nu’n,” said the former actress.

Forster said her daughter, despite being aware of her condition, remains strong.

“She is aware. She only learned the word cancer from her brother. But she doesn’t call it cancer. What she has, tawag niya du’n aliens,” she said.

Caleigh’s older brother, Jared Alfred, meanwhile learned about his sister’s illness when she noticed the three-year-old’s hair falling off because of chemotherapy.

Forster vowed to be behind Caleigh in her fight against leukemia, even though she knows many will still bash her, especially after a controversy involving her and her children from former basketball player, Benjie Paras.

Caleigh is her daughter with a Dutch businessman.

“No matter what happens, I’m going to fight this through with my head up high,” said. “ I know people are going to say, ‘ayan ayan kasi.’ I prayed about it.”

The former actress said the worst comment she got on her Instagram account told her that what’s happening with her daughter is a form of karma.

But Forster does not believe so, saying “my God doesn’t work that way.”

“I’m over it. I didn’t go through it. I just needed to know why it needed to happen. But if they just know what kind of inspiration Caleigh is—even to the nurse, when they are tired, she sings for them,” she added.

Forster said her daughter has been so resilient throughout the treatment.

“She’ll have chemo or surgery, she’ll wake up next day, ask me to open the window and tell me to look up and tell how beautiful the sun rises,” Forster shared.

What was Sarah’s birthday wish for Matteo?