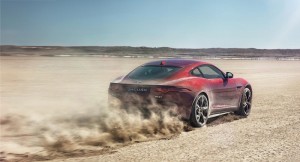 (Relaxnews) – After months of speculation, Jaguar has confirmed that a new version of its flagship coupé will be making its debut at the LA Auto Show.

The F-Type R Coupé with all-wheel-drive has broken cover in South Africa where it is being used as a high-speed communications car assisting with the Bloodhound SCC’s attempt to set a new land speed record of 1000mph.

On the relatively soft surface of the Hakskeen Pan desert in the Northern Cape of South Africa, where the preparations for breaking the record are underway, four-wheel drive is a necessity and Jaguar claims that the new car is 0.2 seconds faster off the mark – 0-60mph in just 3.9 seconds – than its two-wheel-drive counterpart but that the all-wheel-drive F-Type will still feel like a rear-wheel drive car, and that’s a good thing.

As useful as all-wheel drive is at keeping a car on the road, it can alter a vehicle’s handling characteristics and one of the current F-Type’s biggest selling points is its old school sports car feel.

Ian Hoban, Vehicle Line Director, Jaguar said: “Our target with engineering the all-wheel drive F-TYPE was to maintain the engaging rear-drive character that’s so important to Jaguar sports cars, yet offer even greater dynamic capability. The result is a controllable, exploitable and blisteringly fast performance car in all weather and road conditions.”

As well as offering an all-wheel drive version of the 5-liter supercharged V8 engined F-Type R Coupé, Jaguar is also expected to extend the current F-Type range with more engine choices including, potentially a four-cylinder version that could make the car more accessible to more owners.