Jake bent on getting better 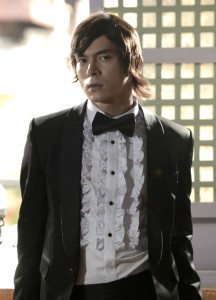 Jake Cuenca has so many reasons to be grateful for, with his notable performance as Franco in the first chapter of “Ikaw Lamang” which eventually earned him not only nods from critics and viewers, but also an award as Male Kontrabida of the Year at the Yahoo Celebrity Awards.

However, the Kapamilya actor is not resting on his laurels, which is why he will take up acting classes at the Lee Strasberg Theatre and Film Institute, a highly reputed acting school in New York. The acting institute is known for having trained some of the most famous celebrities in Hollywood, including Angelina Jolie, Scarlett Johansson, Claire Danes, and Hollywood greats like James Dean, Marlon Brando, Robert De Niro and Sean Penn.

A few months ago, Jake was one of the lucky few to undergo an acting workshop facilitated by Ivanna Chubbuck, who was invited by Star Magic a couple of months ago. Chubbuck is a well-known acting coach and author and has trained Academy Award-winning actors like Halle Berry and Charlize Theron.

Jake learned a lot from the said workshop and inspired him further enhance his skill in acting “to offer something new to his audience.” Thus, he has decided to go to Lee Strasberg.

He left for New York last September 29 and will take a month-long course of an intensive acting program.

He also renewed his contract with ABS-CBN for another two years and will be doing more projects to watch out for.

Just like his career, Jake’s love life is also in full bloom and showed up at the recently concluded 8th Star Magic Ball with girlfriend Chanel Thomas.

Kris now saying no to love?