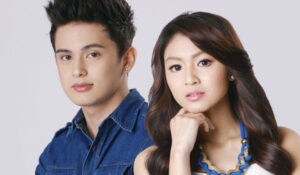 MANILA (Mabuhay) — JAMES Reid and his ka-loveteam, Nadine Lustre, have been separated by their home studio, Viva. Instead of being together, they are competitors now in PhilPop 2015 Songwriting Contest. This is because James is the solo interpreter of the song “Musikaw” by Melchor Magno while Nadine joins forces with Kean Cipriano in interpreting “Sa Ibang Mundo” by Mark Villar.

How do they feel about it? “It’s Viva’s decision na paghiwalayin kami,” says Nadine. “Kasi nga, pangsolo ‘yung song niya at ako naman, I welcome the opportunity of working with Kean for our entry. Kahit naman hindi kami love team dito sa PhilPop, we still support each other.”

Since the winners will be partly determined by text votes, they already have an edge over the other contestants since they have a big fan base as a loveteam who can text for them, especially for James who, like Melai who won in ‘Your Face Sounds Familiar’, is a grand winner in PBB where they showed their strength in text voting.

“Well, let’s just see where the fans will take us,” says James. “But let them enjoy the other songs also.”

The finals night is on July 25 at Meralco Theatre, what’s their wish for each other?

“Not only for us but all the other entries,” says James. “May the best song win.”

James and Nadine just returned from California where they shot scenes of their new soap, “On the Wings of Love”, on location in San Francisco. How was it?

“It was an amazing experience,” adds James. “Nadine and I became closer while shooting abroad.”

Did they have kissing scenes? “Ay, wala po,” says Nadine.

So what’s the real score between them at this point? “We’re still very good friends!” they both say. (MNS)

Luis, Angel officially back together