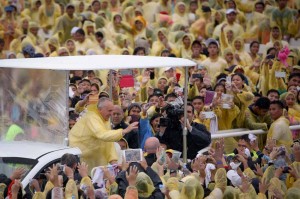 Pope Francis, wearing a yellow raincoat, waves to pilgrims after holding a mass at Tacloban’s airport on Saturday. An emotional Francis, wearing a plastic poncho over his vestments to protect him from the wind and rain, comforted survivors of Super Typhoon Yolanda. (MNS photo)

MANILA, Jan 17 (Mabuhay) – A party-list representative has criticized the government for ordering telcos to turn off mobile coverage in conjunction with the papal visit, saying this is “deleterious to public safety” and “tramples on the people’s right to communicate with each other.”

As part of security measures for the Pope, the National Telecommunications Commission (NTC) ordered telcos to turn off mobile network coverage at certain times that coincide with papal events in Metro Manila.

On Friday, subscribers of Sun and Smart complained of the lack of signal in Metro Manila and neighboring provinces.

Telcos Sun, Globe and Smart argued that turning off cellular coverage was an NTC directive as part of security measures for the state and apostolic visit of Pope Francis.

The signal-jamming was widened to ensure the mobile networks won’t be used to threaten the pope’s security, said Interior Secretary Manuel Roxas II.

Cell phones have been used to remotely trigger explosives.

However, Ridon said “signal-jamming will only lead to more harm than good,” contrary to the government’s goal.

“What if during the large gathering at Luneta this Sunday, for example, family members get separated? What if emergency situations arise? How will the people communicate with each other?

“Surely, the Filipino people wants the Pope to be safe during his visit here in the Philippines, and we understand if certain security precautions are put in place.

“Yet we believe that the government should not go to the extent of jamming mobile phone signals. Communication is an essential part of public safety. Cutting phone lines might truly bring more harm than good,” Ridon added.

The lack of mobile signal inconvenienced the public, but there is no decision yet whether telcos should refund customers, Globe Telecom Inc. senior vice president for corporate communication Yoly Crisanto said.

“We will inform our customers and update you should there be any developments on this,” she added.

Officials of Philippine Long Distance Telephone Co. (PLDT), the parent of Smart Communications Inc. and Sun Celluar operator Digitel Telecommunications Philippines Inc., have yet to comment on the matter. (MNS) 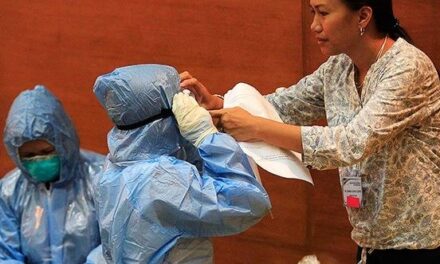 DOH OIC: Protective gear was not needed for returning peacekeepers