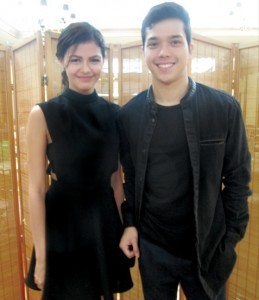 After long-standing rumors, Elmo Magalona and Janine Gutierrez have finally admitted to being in a relationship.

Despite winning her heart, however, Elmo promises to keep wooing Janine. In fact, he is more determined to show how much he cares for her.

“I don’t really want her to get bored, so I just keep thinking of things just to keep it fun,” he said during a recent pocket press conference for GMA-7’s “More Than Words.”

As such, he invited Janine to join him and his friends in a recent trip to Hong Kong.

Janine more than appreciated the gesture, saying that being able to finally visit Disneyland was a “big deal” to her.

Janine related how Elmo influenced her to take her career seriously.

“I became more sure of what I wanted when we got close,” she said, adding, “Kasi when I was starting in showbiz, I was just doing it for fun, I just wanted to grab the opportunity. But now I really really want to make the most of everything…”

Elmo also helped Janine get rid of her mañana habit. “He has this way of making things happen. Ang problema ko kasi sa sarili ko, I wasn’t so pushy to myself. Eh important ’yun, na you need to motivate yourself and stick to your goals… Si Elmo, if you can do it na, just do it,” she explained.

“Before I would always be so (guarded)… Janine kasi is super easygoing and is really fun to be with. She really brings out the best in me.”

Now that they have made public their relationship, Elmo is hoping that, at the very least, the fans he made during his past team-up with singer Julie Anne San Jose would be fine by it.

“I know there are people who will not be happy about it pero sana good vibes lang lahat,” he said.

“We both have gone our different paths and it’s a different chapter for me and for her (Julie Anne),” Elmo added. “We’re not that close anymore pero I know she’s happy for me. I know I’m happy for her.”

Elmo and Janine are paired anew on the upcoming series “More Than Words.”

Both are certain their real-life sweetness would help their onscreen performance. “Because we know each other more, parang ’di ka na mangangapa sa ka-eksena mo,” Janine said. (MNS)