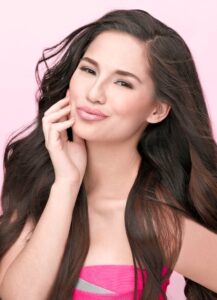 MANILA, May 21 (Mabuhay) — Despite their break-up, Jasmine Curtis-Smith and Sam Concepcion still continue to communicate with each other.

Curtis-Smith also shared her thoughts on a possible reconciliation between them.

“Like I said, hindi naman ako naglalagay ng tuldok sa mga bagay na ganyan,” she said. “Things change, people change. So I think we just have to wait and see what God has planned for us and for myself, or for when God’s right time is for things like that.”
Curtis-Smith said she believes a reconciliation will happen if it’s meant to happen and that she is trying to be open-minded about it.

“I think it’s better to have an open mind about everything in life, because that’s when you can understand yourself better. You can grow to be more mature, about how you think, about stuff like that,” she said.

Last week, Curtis-Smith still refused to talk about what went wrong in her relationship with Concepcion, saying she would rather not talk about other people.

Dennis Trillo hopes to work with John Lloyd Cruz soon, willing to be the kontrabida