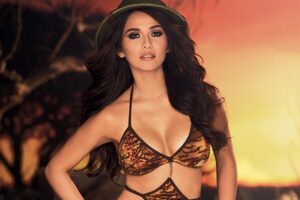 MANILA (Mabuhay) — Actress Jennylyn Mercado has been named as the sexiest woman in the country, based on a poll by a popular men’s magazine.

The announcement was posted on the official Facebook page of FHM Philippines Sunday.

The actress took the top spot from Andrea Torres and Ellen Adarna, who were previously leading in the poll. Other celebrities included in the top 10 were Angel Locsin, Anne Curtis, Sam Pinto, Solenn Heussaff and Jinri Park, among others.

Mercado has always been part of the top 10 but has lost to Marian Rivera and Sam Pinto in previous years.

Rivera decided not to join this year’s FHM party even if she tops the men’s magazine poll, citing her marriage to actor Dingdong Dantes, as well as her pregnancy.

In 2014, Mercado was named best actress in the Metro Manila Film Festival for her role in the hit movie “English Only Please.” She has also been chosen as the calendar girl for an alcoholic beverage brand.

The much-awaited presentation of the 2015 FHM 100 Sexiest Women will be held in July. (MNS)

Charice reacts to ‘That’s My Tomboy’