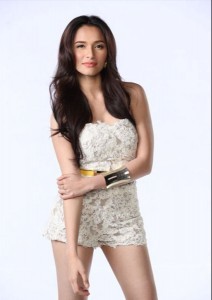 Jennylyn Mercado had few words when asked about the reason behind her controversial split with TV host Luis Manzano, who has rekindled his relationship with “Darna” star Angel Locsin.

Mercado, who is currently single, laughed when asked how she feels about Manzano being in a relationship anew. “Okay lang naman,” she said.

Mercado confirmed her breakup with Manzano in October 2013, after two years of being a couple. Neither shared the reason behind the split, although both were quick to deny that a third party was involved.

The same month Manzano and Mercado admitted they had broken up, Locsin confirmed her separation from football player Phil Younghusband.

Manzano and Locsin got back together in February this year, a month after the actress controversially admitted in a press conference that she is still in love with the TV host four years after they broke up.

Mercado has since been evasive in answering questions about Manzano. In a June press conference, she only wished her former boyfriend well when asked for her reaction to his plans of settling down with Locsin.

Only days later, Locsin was asked to respond to Mercado’s well wishes but was similarly brief with words. “Salamat. Thank you. Happy for you. Thank you. Wala akong masasabi. Ang weird naman, ‘di ba?” she said at the time.

Mercado has said she intends to focus her attention on Alex Jazz, her six-year-old son with former boyfriend Patrick Garcia. She earlier explained this to be the reason why she is “blocking” suitors for now.

Ian Veneracion to focus on his singing career this year

Ara on suing Cristine: It was tough love