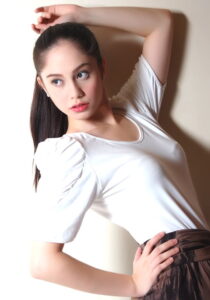 MANILA (Mabuhay) — It’s confirmed. Following much speculation, actress Jessy Mendiola admitted in an interview with reporters on Thursday that she and actor JM de Guzman have decided to call it quits.

In a press conference, the 22-year-old Mendiola was asked about the persistent break-up rumors, which began when De Guzman started posting cryptic messages on his Instagram account back in September.

According to Mendiola, who is part of the upcoming television series “You’re My Home,” they ended their relationship because both of them have different priorities at the moment.

“It’s better siguro na we focus on our respective priorities. Yun lang naman. I just want to focus on myself first. And that’s the same with him,” Mendiola said.

Mendiola, however, maintained that she is still friends with De Guzman and even praised the actor. “He’s an amazing person. He’s very talented. …And I think why I fell in love with him. He’s a very passionate person,” she said.

This is the second time that Mendiola and De Guzman have broken up. The first was back in 2013 after their two-year relationship. (MNS)

Lovi taking it slow with Rocco