There is something to be said about bravado when you’re able to back it up, and Rex Ryan and his New York Jets did just that Sunday afternoon in Foxborough, Mass., upsetting the top seeded New England Patriots, 28-21. With the win they advanced to their second straight AFC Championship.

Facing seemingly insurmountable odds and the demons of last month’s humiliating 45-3 loss to the Patriots, Ryan succeeded in frustrating Patriots coach Bill Belichick and his unflappable quarterback, Tom Brady. Unlike the Baltimore Ravens on Saturday, New York didn’t squander its halftime lead, keeping the heat on Brady and capitalizing on New England’s mistakes. 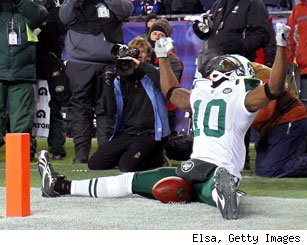 Now the Jets will take their act to Pittsburgh and try to knock off the Steelers at Heinz Field on Sunday at 6:30 p.m. ET to become just the second No. 6 seed to reach the Super Bowl. The first to do it was the 2005 Steelers, who went on to beat Seattle in Super Bowl XL.

Some thoughts on the game:

â€¢ Even though it didn’t result in any points for the Jets, linebacker David Harris’ interception of a Brady screen pass in the first quarter took the air of invincibility away from Brady. It was his first interception in 340 pass attempts and gave New York’s defense an energy boost that carried into the second half.

â€¢ Jets quarterback Mark Sanchez’s 15-yard touchdown pass to Braylon Edwards with 33 seconds left in the first half was his second of the game, which was one more than he had thrown in the previous five games. He added a third later in the third quarter to Santonio Holmes, who made one of his patented acrobatic catches in the left corner of the end zone.

â€¢ When Ryan said during the week that this game was personal between him and Belichick he was doing it more to fire himself up than to disrespect his counterpart. After admitting Belichick had seriously outcoached him in the 45-3 loss in December, Ryan succeeded in winning the chess match, at least in the first half. He never backed away from blitzing Brady and it worked well – until Brady found his rhythm on an eight-play, 80-yard touchdown drive at the end of the third quarter to make it a 14-11 game.

â€¢ Pass protection had been New England’s strength all season, but the Jets sacked Brady five times. That’s a new franchise playoff record for them, and when he wasn’t getting sacked Brady was getting hit or rushed.

â€¢ New England won just about every statistical category – except the turnover battle and of course the final score. With the win, New York became the first team to beat the Indianapolis Colts and New England in back-to-back games since 2001, eliminating Brady and Peyton Manning on the road in the past two weeks.

â€¢ When it’s all said and done, two big coaching decisions by Belichick will be questioned throughout the offseason. The first one came late in the second quarter on 4th-and-4 from the New England 38 when he green-lighted a fake punt, with safety Patrick Chung as the “up” back taking the direct snap. He fumbled it and picked it back up but was tackled short of the first down and the Jets turned that into six points with Sanchez’s touchdown pass to Edwards.

â€¢ Then after Shayne Graham’s 35-yard field goal cut the deficit to 21-14 with 1:57 left in the game, Belichick called for the onside kick rather than kick it deep with two timeouts left and Antonio Cromartie scooped up the loose ball and ran it back 23 yards to the Patriots’ 25. That set up the game-clinching 16-yard touchdown run by Shonn Greene.