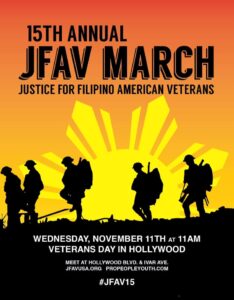 Los Angeles – The Justice League based in Los Angeles or the Justice for Filipino American Veterans, an alliance of veterans’ organizations, community advocates, youth and students announced that they will march for the fourth time in 15 years on Veterans Day, Wednesday November 11 in Hollywood, Los Angeles.

The Justice League with 34 organizations endorsing the mass action on November 11 will dramatize and remind America of their broken promises and unfulfilled pledges to our veterans and relatives for the last 70 years.

JFAV National Coordinator Arturo P. Garcia said, “The Hollywood Veterans Day March will start at 11 a.m. at the assembly area at Hollywood and Ivar St. The groups will assemble at 10:30 a.m. for a pre-rally. Garcia said The Justice League will march together with 34 other groups.

The other assembly areas are at The Filipino American Service Group Inc. (FASGI) at 135 N. Parkview St. Los Angeles CA 90026 at 8 a.m. for the veterans, widows, youth /students and community advocates.

History of Betrayal and Deception

JFAV described the history of the Filipino veterans struggle as , “ On July 26, 1941, six months before the war, US President Franklin D. Roosevelt conscripted the 160,000 army of the commonwealth of the Philippines into the United States Armed Forces in the Far East (USAFFE) making the Philippines, the largest US Garrison outside of the US mainland.

During the war, USAFFE surrendered but not the Filipino people and they waged a three year long war of resistance and rallied again under the US colors and liberated the Philippines from the Japanese yoke.

For their military service, at least 250,000 USAFFE soldiers and guerillas were recognized by the US Army as American soldiers making them eligible for veterans’ benefits.

But six months later on February 18, 1946, the 79th US Congress declared their “military service inactive” and until now, 68 years later they remained unrecognized as American veterans. Out of the 66 nationalities that fought during the war, only the Filipinos were excluded from benefits and privileges they deserved.

As if rubbing salt into the gaping wounds, the US Congress in 2008 did not pass the S 1350 that recognized the Filipino Veterans and that give them lifetime pensions but instead passed the ARRA Law of 2009 that gave them measly lump sum.

For more information about the 14th JFAV March for Justice and Equity please call JFAV at (213)241-0995 or visit our website at www.jfavusa.org or email u at alpiegarcia@gmail.com.