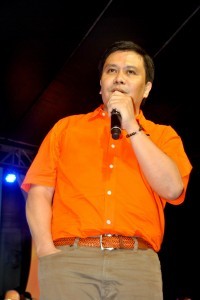 Estrada said he and his wife were scheduled to leave together for San Francisco on November 2. Estrada earlier said his wife needed to get a second opinion for lumps in her breasts.

“Yes, I admit I was not with my wife. We were scheduled to leave on the same day on November 2 but unfortunately my eldest daughter was hospitalized. She had to take care of her first. On November 7, my wife is going to follow. I have a scheduled appointment yesterday with the doctors in the University of California, San Francisco and I have another appointment on November 8 together with my wife,” he said.

Estrada said he went ahead with the trip since he had to submit his wife’s medical records to the doctor.

The senator also denied that he went malling in Hong Kong, saying that his flight only had a stopover at the Hong Kong airport.

Estrada also criticized a parody news site that said he had been arrested in the US for trying to smuggle US dollars inside his breast. The fake news story appeared in the So, What’s News website.

The senator said he was never denied entry into the US.

“That will never be true. I was never arrested. I was never denied entry in the United States. I do not know where these news are coming from. I do not know what they want to deliver to the Filipino people, anong klaseng pagsisinungaling ang gusto nilang gawin sa akin. Hindi ko alam kung bakit sila gumagawa ng ganung klaseng storya,” he said.

Justice Secretary Leila de Lima is asking the Department of Foreign Affairs to cancel the passports of Estrada and 36 other people included in the plunder, graft, bribery and malversation charges in connection with the pork barrel scam.

She later said Estrada is free to leave the country since the DFA had yet to act on her request.

Estrada is set to return to the country before Senate sessions resume on November 18.(MNS)

US Dept. of Labor officials meet with ConGen Herrera-Lim