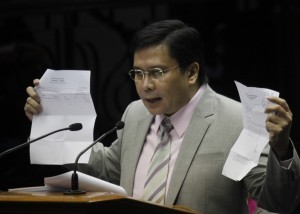 MANILA (Mabuhay) – The lawyers of detained Senator Jinggoy Estrada on Monday blocked the testimony of a bank investigator of the Anti-Money Laundering Council, saying the prosecution violated the rules of law.

The hearing, the first since the Fifth Division attempted to recuse themselves from the plunder and graft cases of Estrada, was marked by heated exchanges between the defense and the prosecution.

The prosecution was set to present whistleblower Merlina Suñas, but the death of Suñas’ mother prevented her from testifying. “We can’t know when Suñas mother will die,” prosecutor John Turralba said.

As a back-up witness, the prosecution panel offered an AMLC investigator. However, lawyer Paul Mar Arias, Estrada’s counsel, said the prosecution should not be allowed to present him since the evidence he will present has yet to be stipulated.

Arias added that the prosecution surprised them with the AMLC witness, going against a previous agreement that all sides of the case should be informed of the intended witnesses.

“That would not explain why they didn’t inform us who their witness will be, since they subpoenaed this witness last week, “ Arias said.

The court, for its part, allowed AMLC witness, Atty. Orlando Negradas to take the witness stand, but only to identify the AMLC report pertaining to the Napoles funds. It also ordered the prosecution and the defense to sit down and mark evidence to resolve the issue.

“Identify and stipulate before the clerk of court. So that there will be no more introductory questions,“ Justice Roland Jurado said.

Meanwhile, during Negradas’ testimony, he testified that the AMLC investigation on the bank accounts of alleged pork barrel scam mastermind Janet Lim-Napoles was spurned by media reports, as well as letter requests from both the National Bureau of Investigation and the Office of the Ombudsman.

Upon finding irregularities and red flags in the bank accounts of Napoles, her children, and several lawmakers,  Negradas said his team prepared a request to freeze the accounts, initiate a bank inquiry and file a civil forfeiture case.

However, the actual contents of the AMLC report will be discussed in a separate hearing, pending the marking of all evidence. (MNS)

Working student’s story helps others get cars from Victory autos