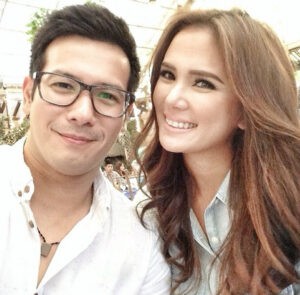 JOHN Prats officially proposed marriage to Isabel Oli in late September last year, staging a flash mob of dancers in Eastwood in front of the public.

They’re now officially tying the knot on May 15. They’ve just released their pre-nup Nice Print photos and it has a four seasons theme: Winter, spring, summer, fall. This is their way of sharing one of the happiest moments in their lives with their fans.

Isabel prefers a small intimate wedding and this will be held at the farm of the Prats family in Batangas. Only family members and very close friends will be invited to the affair.  Isabel will be wearing a creation of New York-based fashion designer Vera Wang, which John got for her when they had a vacation in the States last Christmas. She’ll actually wear two different gowns: One for the wedding ceremony and the other, for the reception.

John was previously linked to Heart Evangelista, Nancy Castiglione, Rachelle Anne Go, Bianca Manalo and Shaina Magdayao. Isabel was, in turn, linked before to Marco Alcaraz, James Yap and Paolo Contis. It was John’s younger sister, Camille Prats, who acted as a matchmaker in introducing them to each other. Here’s hoping their wedding will be hitch free and that their marriage will last for a lifetime.

They plan to have a baby right away. Isabel says they want to have at least four kids, but John jokingly says he wants 14 kids no less. “Bahala na si Lord how He will bless us,” he adds. “Basta we want a big happy family.” (MNS)