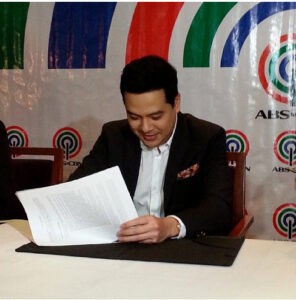 Actor John Lloyd Cruz ended speculations that he is moving to another network when he renewed his contract with ABS-CBN.

Cruz signed a three-year contract with the network, which was represented by ABS-CBN president and CEO Charo Santos-Concio.

The actor also doused speculations that he had problems with ABS-CBN.

Cruz admitted that he found the contract negotiations a “humbling” experience.

“You are talking about Charo Santos-Concio giving you advice on how to stay in the business, on how to work around it. Parang ‘di lahat nabibigyan ng ganoong opportunity. I say humbling because parang kahit na anong goal na mayroon ka, kahit anong dream mayroon ka, hindi mo siya magagawang mag-isa,” Cruz said.

Asked if this includes movies with Sarah Geronimo and Bea Alonzo, Cruz said he has learned to be more cautious when discussing future projects.

No wedding date yet for Jolina, Mark