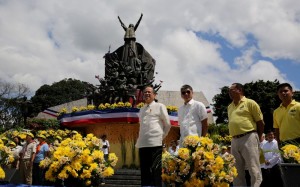 Saguisag described Arroyo’s passing as a “shocker,” noting he did not know that Arroyo was brought to the US. He said they last communicated in January this year.

Sen. Aquilino “Koko” Pimentel III is the chairman of the Senate blue ribbon subcommittee that is investigating the alleged corruption involving the Binay family, with Sen. Antonio Trillanes IV as one of its members.

Arroyo first made his mark as a human rights lawyer who challenged before the Supreme Court the constitutionality of Proclamation 1081, which imposed Martial Law.

During the dictatorship, he also defended several political detainees in court, among them slain Se

He served as the counsel of Ninoy’s widow, Cory, during the 1986 snap elections.

With a new government following the 1986 EDSA People Power Revolution, Cory appointed him as executive secretary. He then went on to become chairman of the Philippine National Bank and executive director for the Philippines at the Asian Development Bank.

Arroyo began serving in Congress as the representative of Makati in 1992, where he stayed for three terms.

As his tenure there came to an end, he became lead prosecutor in the impeachment trial of former President and now Manila Mayor Joseph Estrada.

He was elected to the Senate in 2001 and served as chairman of several committees, including the Senate Blue Ribbon Committee, until his last term ended in 2013.

At Congress, he was known to be one of its thriftiest members, maintaining this reputation for some 20 years.

At the Senate, his expenses paled in comparison to those of his colleagues. Records from the Commission on Audit in 2010 showed that he spent P16.65 million then. Reports also said he did not collect his share of the Priority Development Assistance Fund (PDAF). (MNS)

9 ‘harmless’ habits that age you