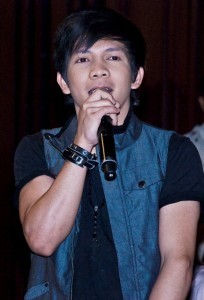 MANILA, Apr 30 (Mabuhay) — Singer Jovit Baldivino’s ultimate dream is to become a lawyer so despite enjoying a successful music career, he has gone back to college.

Baldivino revealed that that he is taking up BS Criminology and is now on his second year at the Batangas State University.

According to Baldivino, it was his godfather, who is a lawyer, who inspired him to take up law.

Baldivino considers himself lucky to be able to fulfill his dream while enjoying his showbiz career.

In 2010, Baldivino became part of the short-lived musical series “Idol” with Coco Martin and Sarah Geronimo. He was also part of “Growing Up” with Kathryn Bernardo and Daniel Padilla in 2012. (MNS)

How Richard Yap got role in ‘Praybeyt Benjamin’ sequel