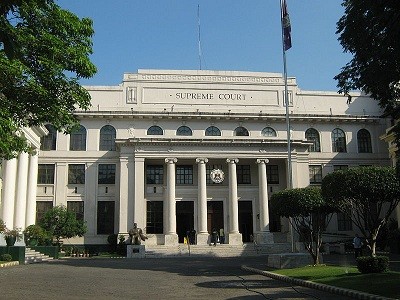 MANILA (Mabuhay) – A judge from Mindanao has asked the Supreme Court to strike down a Judicial and Bar Council (JBC) policy requiring judges to have at least five years of experience in the lower courts before applying in second-level tribunals.

In his petition, presiding Judge Ferdinand R. Villanueva of the Municipal Circuit Trial Court in New Bataan, Compostela said his application to become a regional trial court (RTC) judge should be approved by the court because the JBC’s five-year requirement was in violation of the 1987 Philippine Constitution.

The five-year requirement is on top of the constitutional and statutory requirement of 10 years of law practice.

“It is fervently prayed that this court will issue a mandatory injunction and order the JBC to implement fully Republic Act 8557 and to order the JBC to scrap the long standing policy of five years experience over and above the ten (10) years practice of law,” said the judge.

The petitioner asked the SC to “declare the unconstitutionality of the policy requiring five (5) years experience as lower court judge and those that are not prescribed in the constitution and the statutes” or what he said were “so-called unwritten rules.”

The judge said the policy is neither in the Constitution nor in Republic Act No. 8557 which is an act establishing the Philippine Judicial Academy (PHILJA), defining its powers and functions, appropriating funds, and for other purposes.

“It is a grave abuse of discretion amounting to lack or excess in jurisdiction, with all due respect for the JBC to implement what is not required by law (on five-year policy) while deferred the full and mandatory implementation of RA 8557 which was prescribed by Congress (that applicants should pass and complete the pre-judicature program).”

The JBC is constitutionally mandated to screen applicants and select nominees for vacant posts in the judiciary and the Offices of the Ombudsman and Deputy Ombudsman.