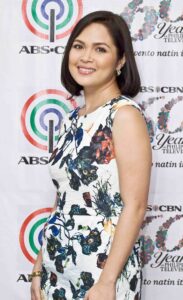 JUDY Ann Santos revealed she had issues with the Kapamilya Network but all is well now.

The actress said that she and the station did not see eye to eye on some matters. She did not elaborate.

“Nagkaroon ng tampo pero maliit lang. Maliit na bagay na napag-usapan din namin after a while,” said Juday, star of the new soap, “Someone To Watch Over Me”.

Juday said it’s a common occurrence between employees and the company not to agree on most things. She’s just thankful that it was resolved immediately.

Juday said that her main focus last year was hosting and she’s letting acting take the wheel this 2015.

“I was doing ‘I Do’ and ‘Bet On Your Baby’ at the same time and when they presented the teleserye last year, wala na talaga akong day na pwedeng mag taping. So, we, with Dreamscape, decided na 2015 na lang yung teleserye para fresh. Yung 2014 puro hosting lang ang ginawa ko and for 2015 naman is my comeback to acting,” she said.

Her last series was “Huwag Ka Lang Mawawala” in 2013. Carrying the international title “Against All Odds”, the hit action-suspense-drama was sold for airing in Malaysia, Cambodia, and Vietnam last year. (MNS)

Enrique says Liza is too young for him

ABS-CBN franchise lies with Congress not with Duterte admin — DOF