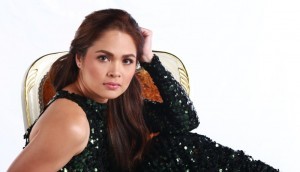 MANILA (Mabuhay) — ABS-CBN has offered a new project to Judy Ann Santos, an executive of the Kapamilya network said, as the primetime series starring the actress nears its conclusion.

Addressing concerns brought up by Santos’ fans on the social networking site, Dyogi explained that the soap’s relatively short run reflects the “actual length of the story.”

“It was as planned by the creators of the soap. Short but powerful story… What the creators don’t want to happen is to extend the story unnecessarily. [‘Huwag Ka Lang Mawawala’] is one of the best crafted soaps of [ABS-CBN],” he said.

Directed by Malu Sevilla, Jerry Lopez Sineneng and Tots Mariscal, “Huwag Ka Lang Mawawala” premiered on ABS-CBN’s Primetime Bida block on June 17. It will run for two more weeks, according to Santos, before airing its final episode on August 23.

Dyogi said Santos has already been offered a new Kapamilya project, which he said will be “new” for the actress dubbed the “Queen of Pinoy Soap Opera.”

“Hopefully Judai (Santos) accepts the new project we offered her. Bago na [naman] for her… Judai is well-loved! Thanks for giving her your full support,” the director said, addressing a follower on Twitter.

On her own Twitter page, the 35-year-old Santos said early this week she is “processing things,” when asked if she is considering switching networks after “Huwag Ka Lang Mawawala” ends.

Dyogi, in another tweet on Wednesday, likewise addressed a follower who brought up Santos’ possible move to another station. “I think she will stay. Will pray for that,” he said.

Santos, meantime, expressed her excitement over the unfolding of the story of “Huwag Ka Lang Mawawala” as it approaches its conclusion.

Her character, Anessa, has resurfaced as Angela Balaguer on a quest for revenge on her abusive husband, Eros (Sam Milby), and his family for keeping her apart from her son.

“Huwag Ka Lang Mawawala,” which airs after “Muling Buksan ang Puso,” maintained its lead in national TV ratings over its rival shows aired on GMA-7 and TV5 in the first week of August.

Diet wants to work with ex-girlfriend