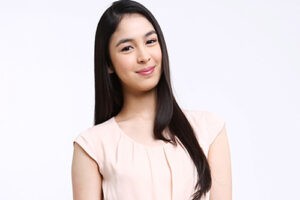 The young actress made the statement during their interview when they were asked about their similarities with their characters in the upcoming movie “Para sa Hopeless Romantic.”

The young actor answered that they are somehow similar because he is also the shy type who does not know how to express his feelings for a girl.

“I play Ryan in this movie. Siya ‘yung torpe. He doesn’t know how to express his emotions or say it to the girl that he likes, who is Maria. He’s the nice guy in school. He’s a good kid. May mangyayari doon kung paano ko masasabi yung emotions ko kay Maria,” he said. “Actually meron din akong pagkatorpe minsan.”

To which, Barretto quipped: “May pagkatorpe? You’re very [torpe].”

“He tells me everything and he asks help from me. I know if he’s torpe or not, and he is,” she explained.

Pascual then admitted they are like best friends that tell each other everything.

Asked about doing romantic scenes when they are just close friends, Pascual said: “I guess you really just have to be comfortable with each other. You just have to trust each other and know what you guys want. There has to be teamwork.”

As for Barretto, she said: “It’s important that you’re comfortable with each other so you’re able to do what is asked of you to do. Like what I always say, friendship is the best foundation.”

How to handle long-distance relationships? Maymay Entrata has this answer

Paulo Avelino looks back at ‘inspiring’ 2014