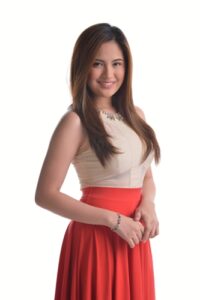 MANILA (Mabuhay) –JULIE Anne San Jose says she was shocked when she heard the news that she is pregnant and the father is Kapamilya actor Coco Martin.

Julie Anne is so lucky to have met American record producer Sydney Omen Brown from Harlem in L.A. last year. He saw her show then invited her to record not just one but three music videos. This means Brown, who has produced songs for artists like Ludacris and Lil Wayne, really believes in her talent.

Aside from “Tidal Wave”, alight upbeat tune, she also did the music videos for the songs “Not Impressed” (which she says has an urban R&B underground sound) and “Forever” (which she says is more mature.) They’ll be released later this year. All the music videos were done under the supervision of Mac House Productions and Julie Anne got to work with dancers and models of different nationalities.

“For the shoot, may scenes na nagi-skateboard kami so nag-aral muna ako,” she says. “They were all nice and received me very warmly. They googled raw kung sino ako and they became aware of my career dito sa ‘Pinas. Sabi nila, we’re gonna be famous in the Philippines because of Julie Anne. I really had a great experience working with them.”

She is paired with a handsome Caucasian guy named Kyle in “Tidal Wave” and the video ends with them being shown about to kiss each other. The video ends just before their lips touch. “Ay, hindi natuloy, bitin!” say the writers present at the launch of the video.

“Talagang hanggang doon lang po ‘yon,” says Julie Anne, who is now so slim and sexy, with a 23-inch waistline. She can really hit it big given the right projects. Right now, she’s hosting “Day Off” on GNTV, is part of “Pepito Manaloto” and “Sunday All Stars”, and will soon be seen in the soap, “Buena Familia”, where she plays eldest daughter of Angelu de Leon and Bobby Andrews.

“Kapatid ko sina Julian Trono and Mona Louise Rey, but our dad has an older daughter from a previous relationship, si Kylie Padilla. Kylie is paired with Martin del Rosario while me, kay Jake Vargas.”

Honestly, we think that it would be best for her to be paired with Alden Richards, who has been without a soap for six months now and to whom she was linked before. Like her, Alden doesn’t have a regular ka-loveteam now after her team up with Elmo Magalona broke up. We believe Julie Anne and Alden will look good together on screen and if they’re paired in a soap, we have no doubt it will be a big hit. (MNS)

MARJORIE BARRETTO ON HER SISTERS CLAUDINE, GRETCHEN: ‘I WON’T WISH ILL OF THEM’